MISSING MOUTH GUARD & CHIN STRAP THAT HAPPENED OVER TIME WHILE IN STORAGE!

From the feature film based on the ever popular TV series comes a CHP screen used background motorcycle helmet.

COMES WITH COA AS SHOWN ABOVE

This was one of her first feature films with an incredible performance.

Written on inside of coat with silver marker "J Lopez Hero" & Inside of uniform shirt with black marker "Lopez Hero S" WITH COA!

20% RESTOCKING FEE ON ALL RETURNS!

Zipper broken on the vest from use during production.

COMES WITH COA AS SHOWN ABOVE

Used by Cop #1 in the film Officer Yang.

COMES WITH COA AS SHOWN IN PHOTO ABOVE...

Don't miss your chance to own this item today!

MORE PHOTOS AT BOTTOM OF PAGE IN THE PHOTO GALLERY!

Hugh Jackman Personally Owned Belt - Direct from his appearance on the Conan O'Brien Fox Tv show is Hugh Jackman personally owned silver "Elvis" style belt with stars and mirrors, complete with hanging chains. A very detailed and rare item to own from his personal collection (41x5).

As a teenager, grew to 6' 5" and dreamt of becoming a Harlem Globetrotter or an NBA player.

Sinbad, who works clean and is family-friendly, features animated antics that have boosted him the top of the standup circuit, as well as finding success in television and film. A Michigan native, Sinbad honed his craft early on by entertaining his three brothers and two sisters and refining his unique sense of humor. A passion for basketball–especially the Harlem Globetrotters–won Sinbad a basketball scholarship to the University of Denver, but a knee injury put an end to any professional sports aspirations he may have had.

MORE PHOTOS AT BOTTOM OF PAGE IN THE PHOTO GALLERY!

One of the best in the Disney "Herbie-Love Bug" sequels -

This is one of his screen worn racing jackets he wore in the flim, instantly recognizable by the biggest sponsor: UPS. It is an official Chase Authentic Drivers Line Jacket, complete with not only UPS but all of Jarrett's sponsors patches. Has some dirt and stains from production use. (Size L).

20% RESTOCKING FEE ON ALL RETURNED ITEMS!!! 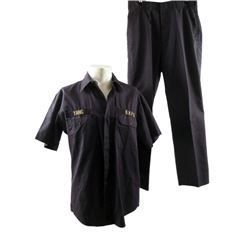 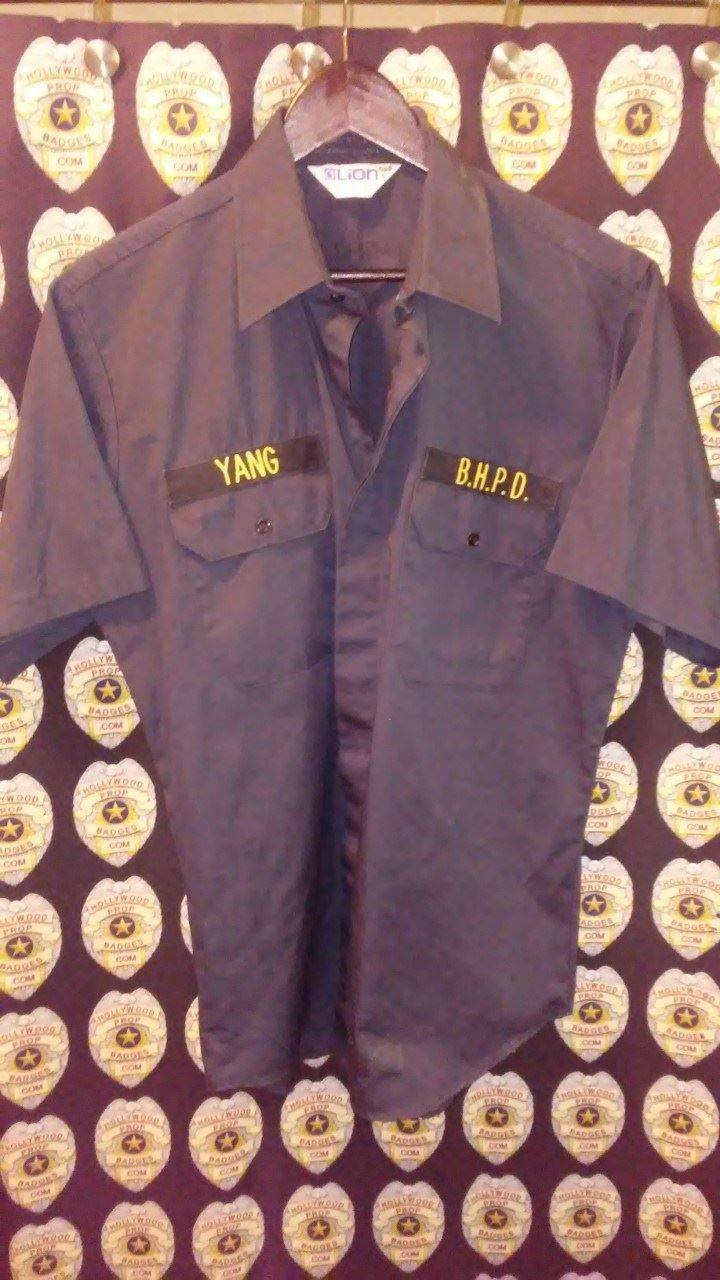 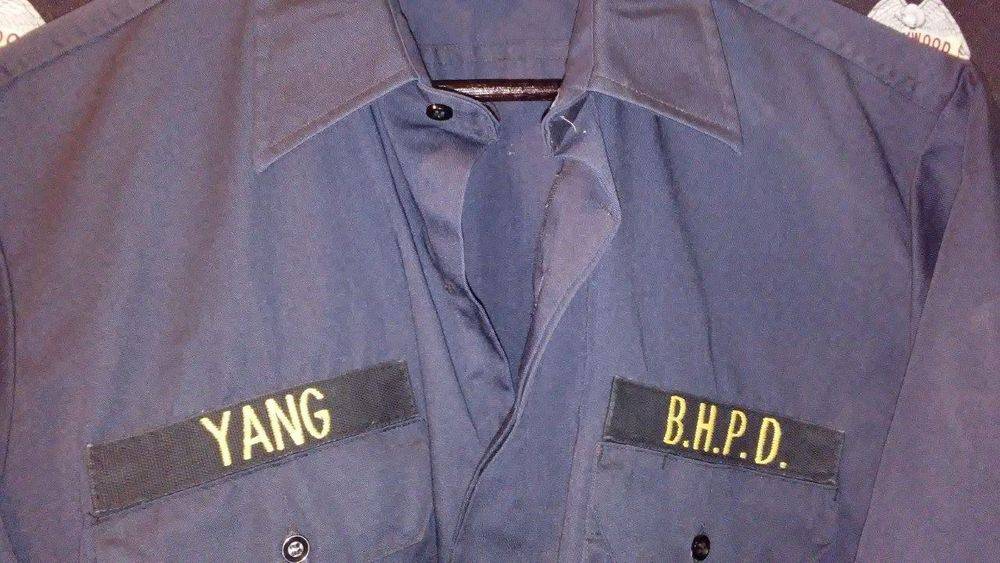 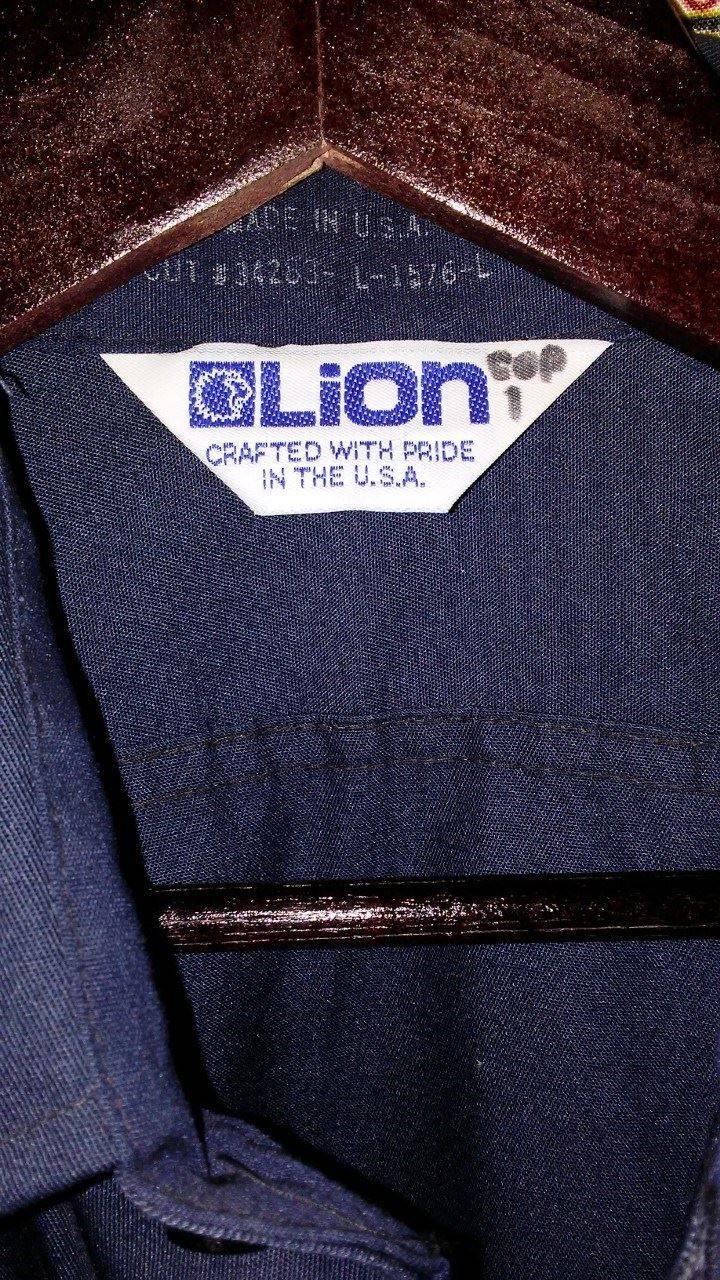 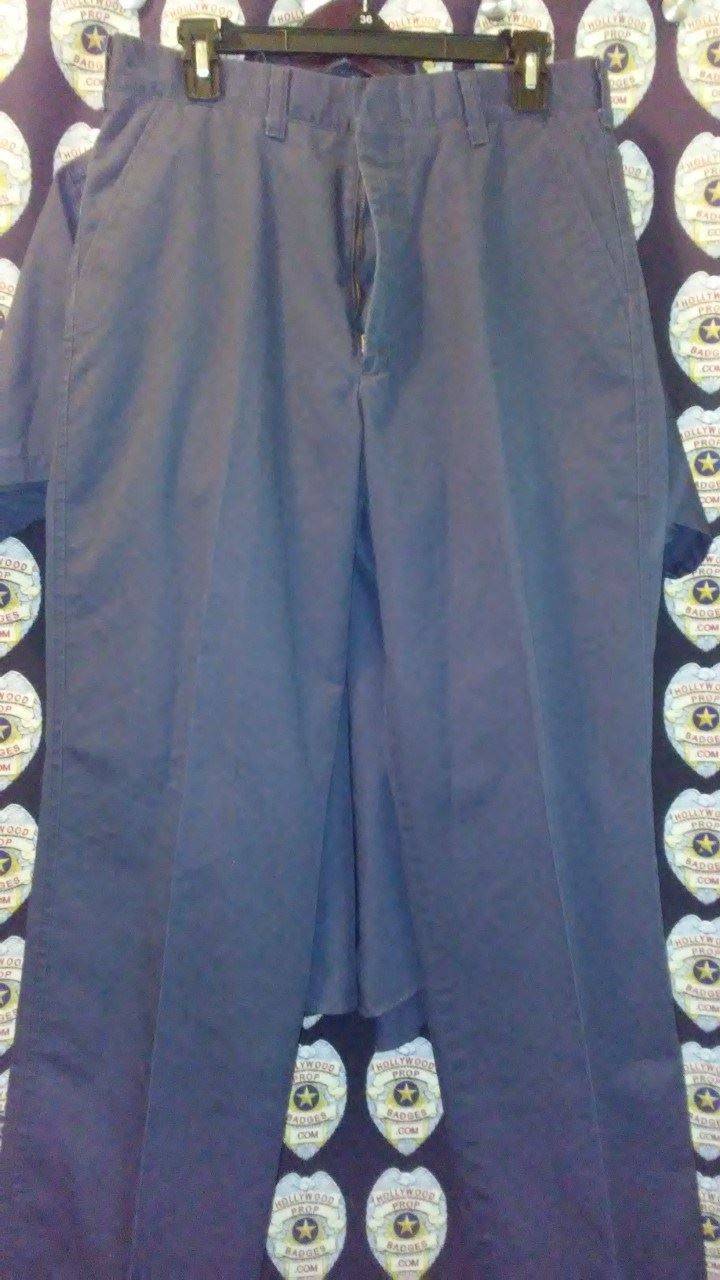 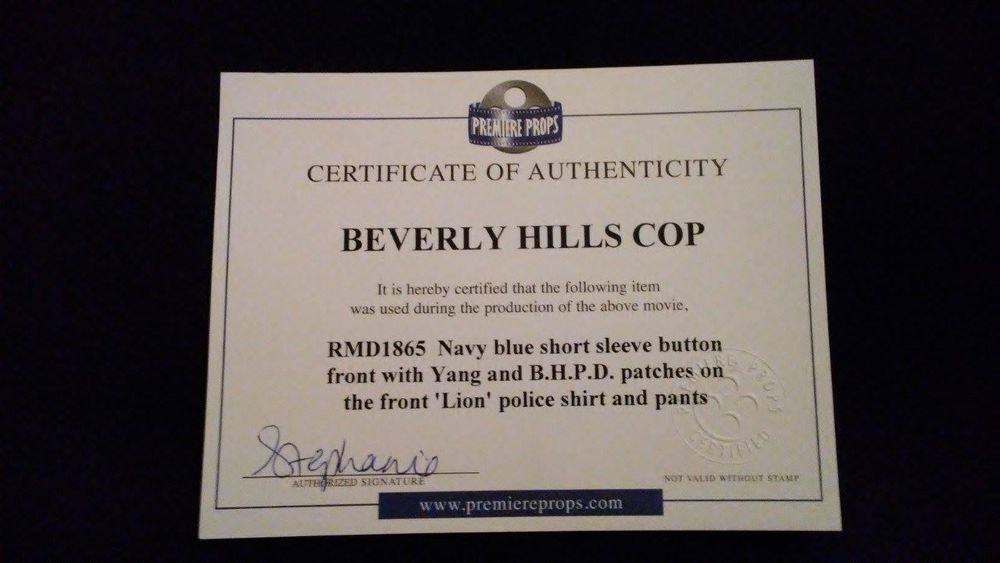 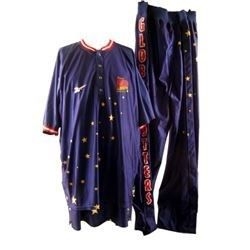 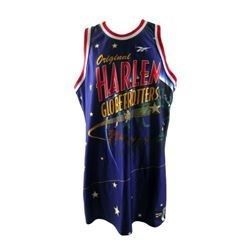 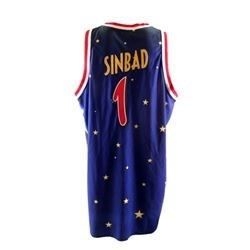 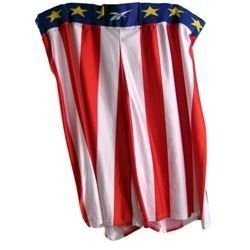 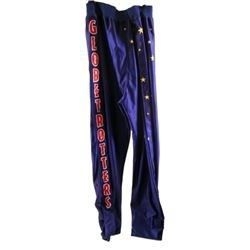 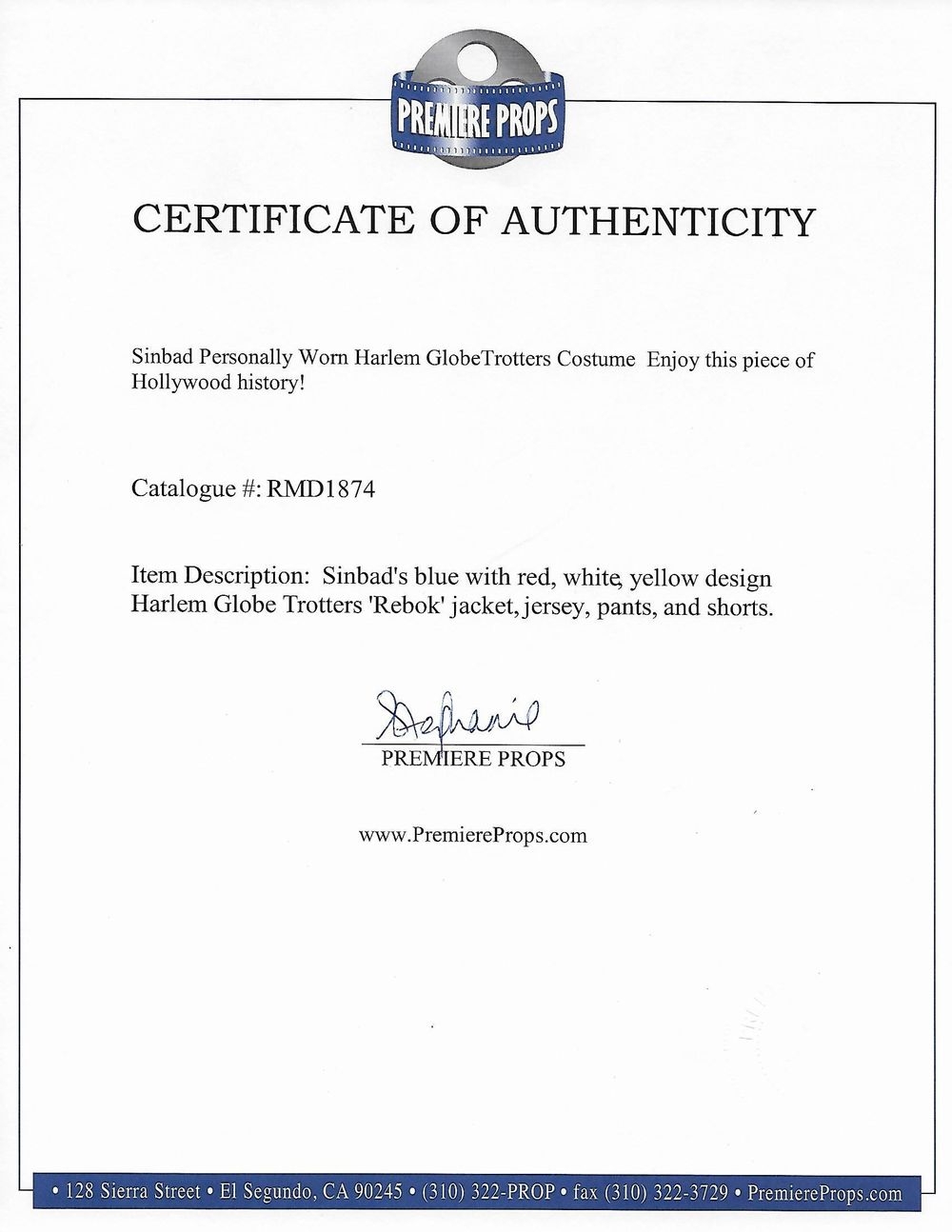 (click on image to enlarge) SEE MORE PHOTOS ABOVE IN THE PHOTO GALLERY...Janet Jackson Shoe Mold by Pasquale Di Fabrizio These are original shoe mold made for singer and actress Janet Jackson by "Shoemaker to the Stars" Pasquale Di Fabrizio! This one of a kind mold was hand crafted (after a personal fitting) then was used to create footwear for Jackson's specific needs. Length from back heel to toe is about 9.5 inches. Measures about 3 inches from ankle to back heel, mold is marked as a size 38. Molds are in excellent condition with no sign of damage. Auction will also include the original box the molds were stored in along with paper cut out designs used to make the shoes. A letter of authenticity will be included. Pasquale Di Fabrizio was a well-known and respected shoemaker based in Los Angeles. He passed away in 2008. ... Seeing Stars: Where the Stars Shop Di Fabrizio Shoes 903 N. Fairfax Ave Los Angeles, CA He has made dance shoes for Michael Jackson. He has made boots for the rock group Kiss. And he made all of the shoes for Sylvester Stallone's "Rocky" movies. Who is he? He's Pasquale Di Fabrizio, who calls himself "The Stars’ Shoemaker." And that title certainly fits. From his little shop on Fairfax Avenue (near Farmers Market) Di Fabrizio has hand-made shoes for the biggest names in show-biz, including: Arnold Schwarzenegger, Sylvester Stallone, Robert De Niro, Michael Douglas, Elizabeth Taylor, Jack Nicholson, Madonna, Sharon Stone, Whoopi Goldberg, Danny DeVito, Richard Gere, Dolly Parton, Tina Turner, Geena Davis, Uma Thurman, Liza Minnelli, Jane Fonda, Nicole Kidman, Hugh Hefner, Barbara Mandrell, James Woods, Paul Sorveno, Lynda Carter, Mickey Rourke, Jennifer Connelly, Bo Derek, and formerly Ronald Reagan, Frank Sinatra, Dean Martin, George Peppard and Telly Savalas. But it doesn't come cheap. Prices for shoes made by this Italian master start at $500 and up. In fact, Mr. Di Fabrizio no longer sells directly to the stars - instead he sells only to TV and movie production companies, for whom money is no object. He says that sometimes the stars don't remember to pay. According to Di Fabrizio, Sly Stallone and Mickey Rourke still owe him. His shop on Third Street has a wall full of B&W photos of the stars, and is filled with shoe boxes labeled with the names of his celebrity clients. Di Fabrizio says that Warren Beatty met future wife Annette Bening in his shop. He also says that when Sly Stallone and Arnold Schwarzenegger were feuding once, they made up here. Di Fabrizio's first celebrity client was Dean Martin, who then brought in Frank Sinatra, and the rest is history. Sometimes, the stars need more than just a pair of shoes. Mr. Di Fabrizio says that he sometimes gives stars a lift - literally. He notes that his shoes added 3 1/2 to 4 inches Sly Stallone's height. He also helped with Elizabeth Taylor's bunions, and designed a special pair of shoes which helped Danny DeVito limp as 'The Penguin' in "Batman Returns." Besides the movies, Di Fabrizio also makes shoes for Broadway shows, such as 'Rent', 'Phantom of the Opera', 'A Chorus Line', 'Victor/Victoria', 'La Cage aux Folles', and 'Dream Girls'. He did the first pair of big black shoes for Mickey Mouse, and also the pair of walkin' boots that Nancy Sinatra wore when she appeared au natural in 'Playboy'. Occasionally, Di Fabrizio auctions off some of his celebrity shoes. A pair he made for Judy Garland sold for $126,000. He has even written a book about his life with the stars. Its title? "The Soul (Sole) of a Shoemaker"

(click on image to enlarge) SOLD...John Schneider Personally Owned Pre-Dukes 1977 Stage Worn Outfit...he wore these & Made them for his high school musical Annie Get Your Gun. They are made of silk (satin) material very heavy duty. They have a tear on the backside left butt area...no size as they were hand made!!! SEE MORE PHOTOS BELOW ON THIS PAGE (Just click on ALL images to enlarge)! 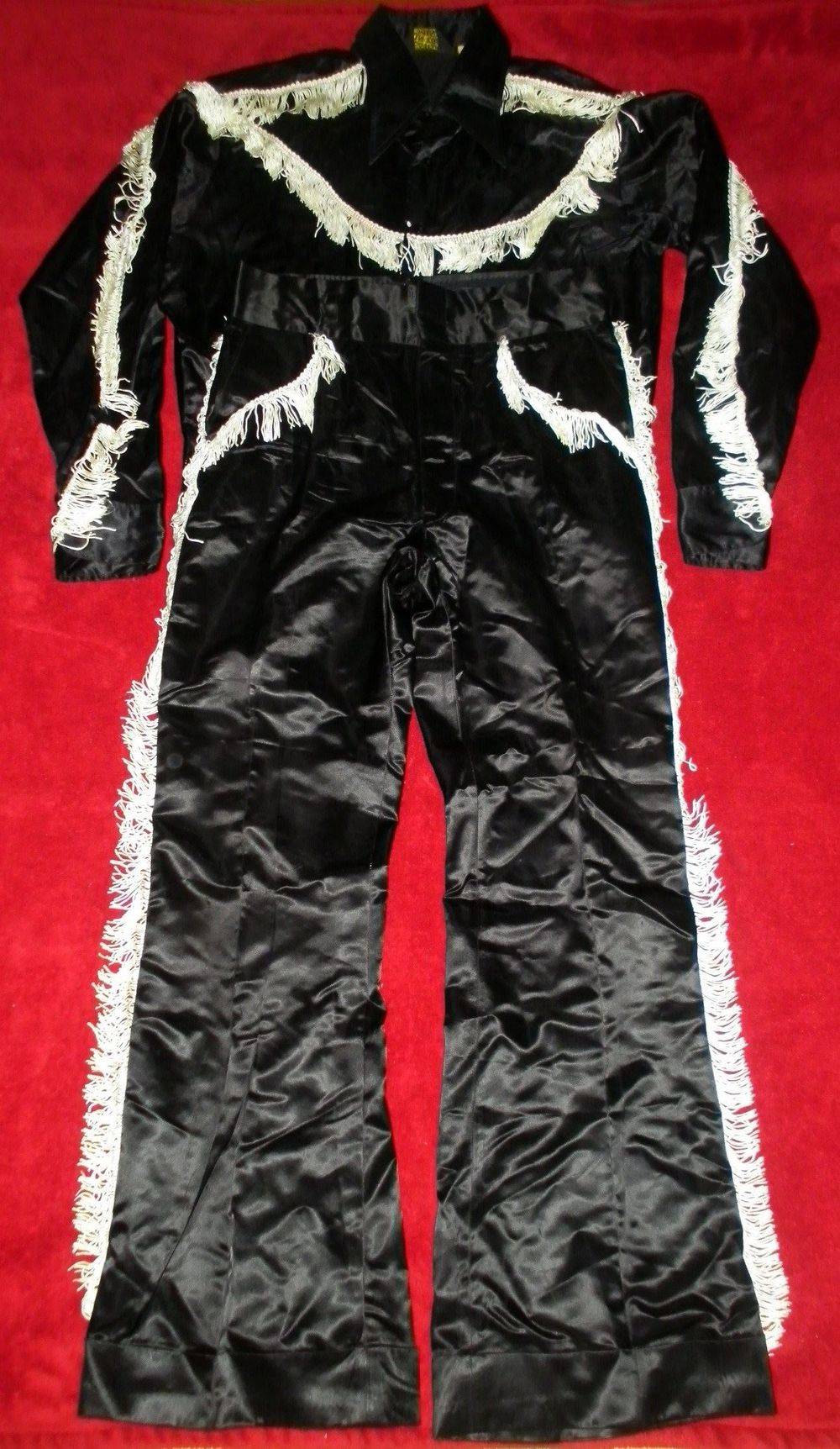 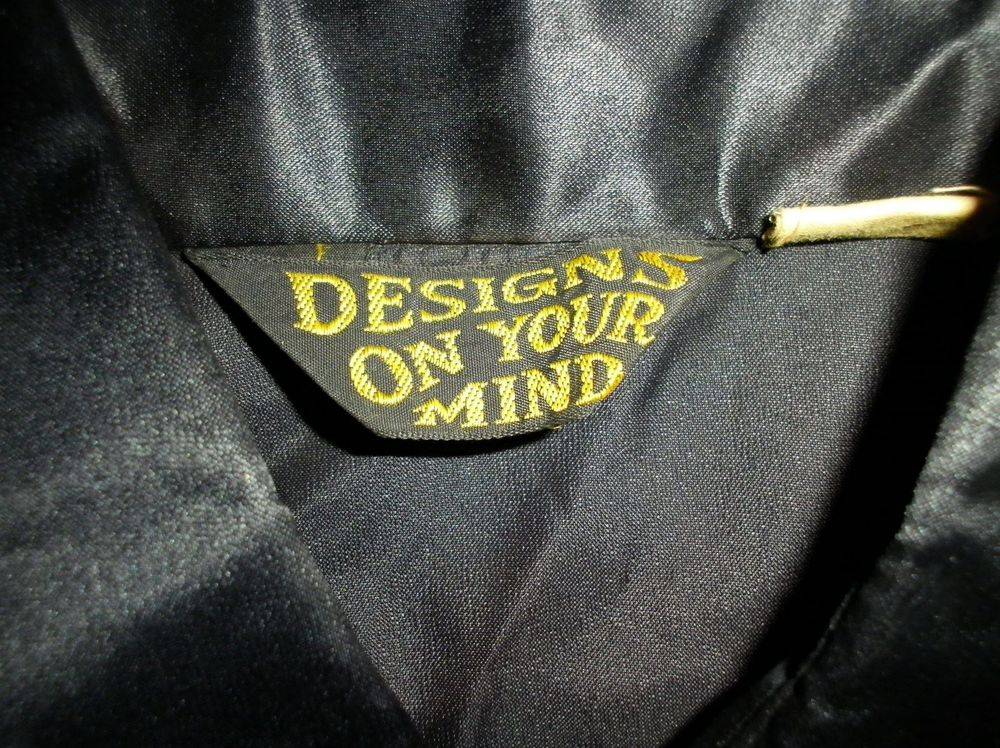 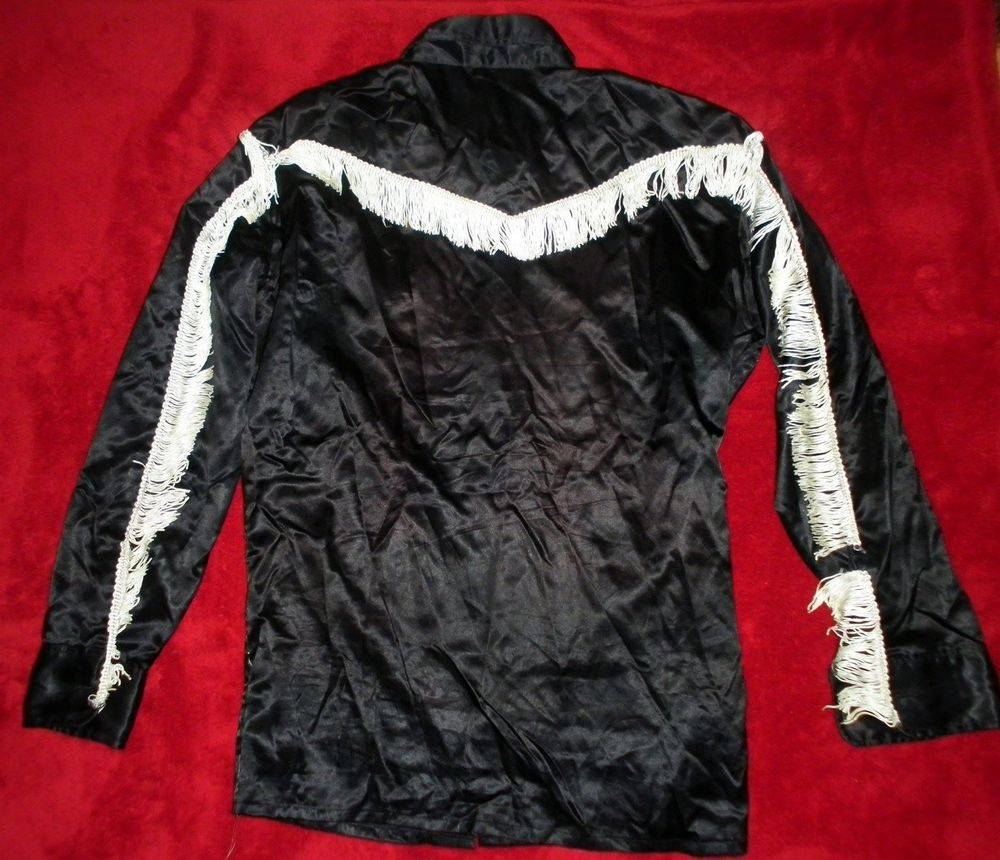 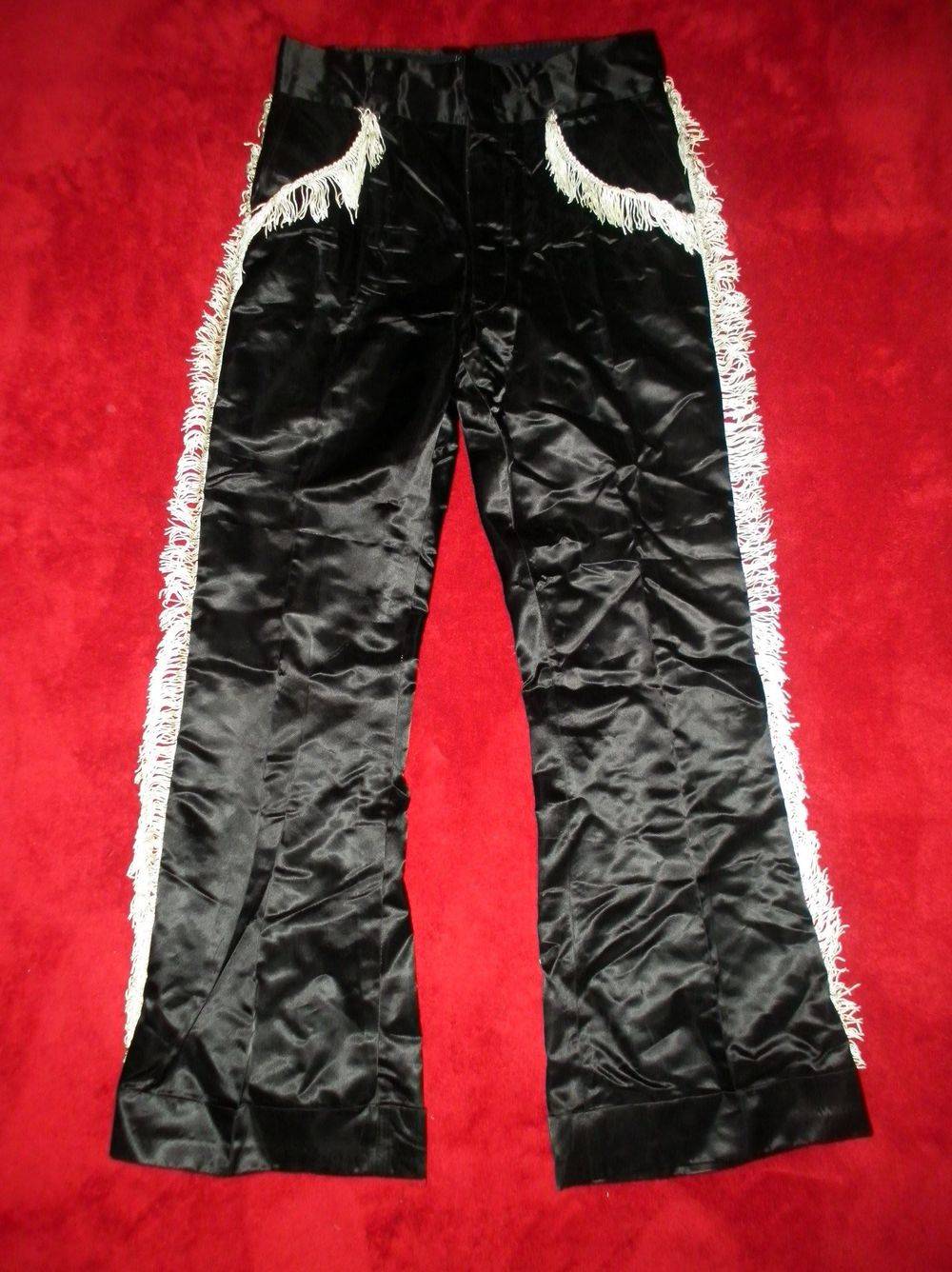 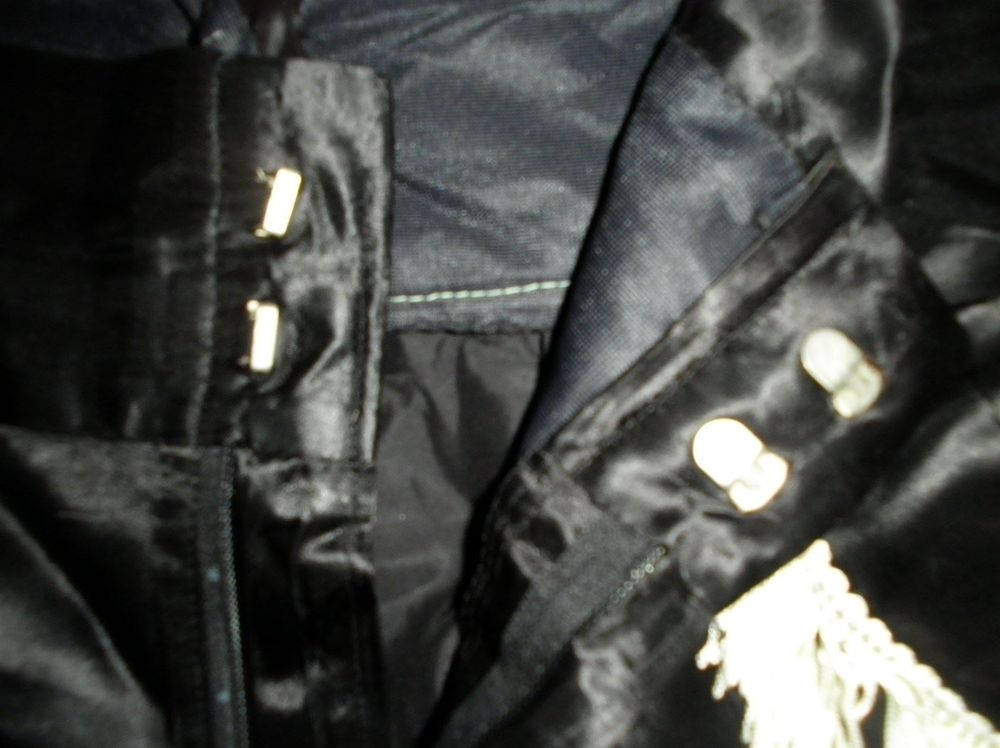 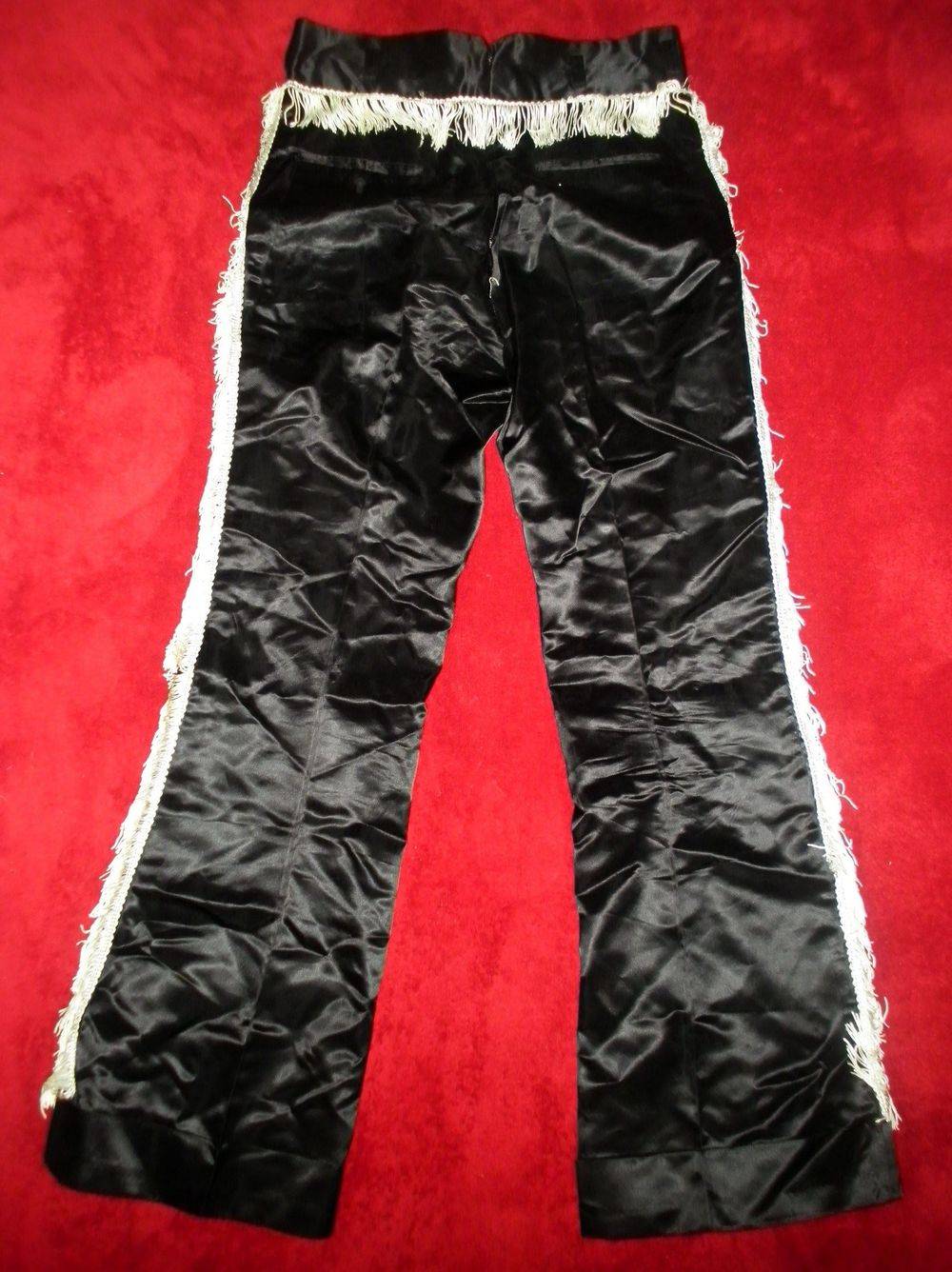 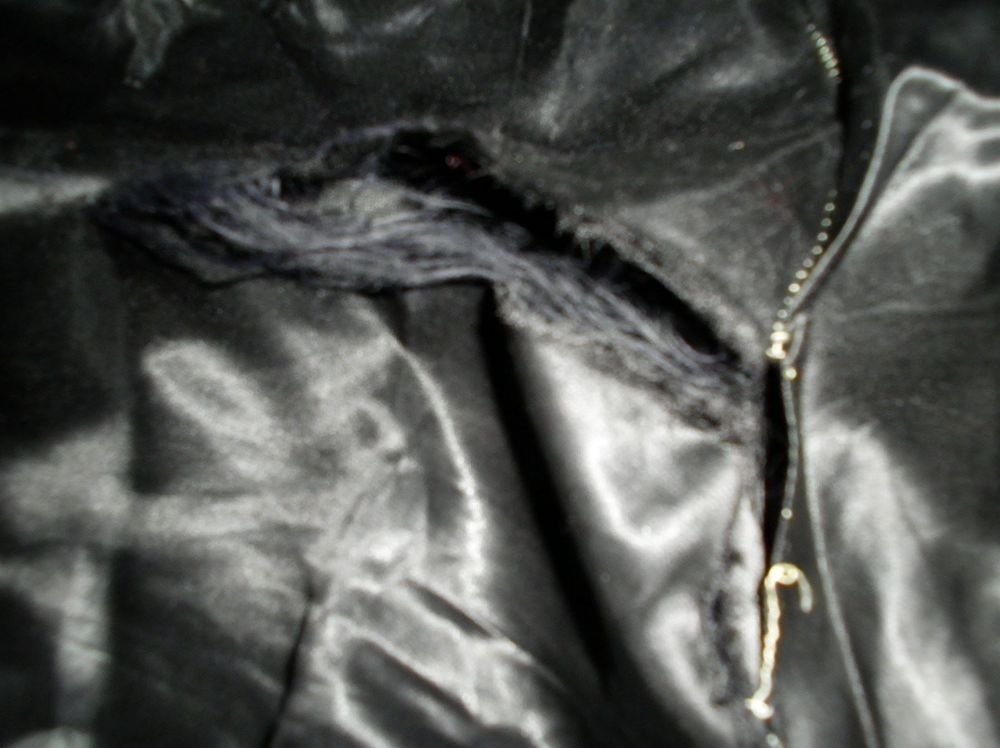